All dams leak. Generally, the leak will continue to get worse until corrective action is taken. Mountain Grout Polyurethane Resin has been used to stop leaks in both concrete dams and earthen dams, both large and small for over thirty years.

Concrete dams often develop cracks that leak due to movement caused by geological stress, poor compaction, or inappropriate soils to be compacted during construction. In other cases, the water finds a pathway underneath the dam breastwork. Earthen dams can lose large volumes of water through poorly compacted fill dirt seams. In smaller earthen dams, the leaks in can even be caused by muskrats or other wildlife.  All of these issues can be solved with Mountain Grout Polyurethane Resin, though the specific resin and application methods may differ depending on specific site conditions.

The key to success in addressing leaks in dams is identifying the location of the leak.  An entire curtain wall of grout can be constructed in an earthen dam when the leaks might be corrected at considerably lower cost by identifying the problem area.  With cracked concrete dams the location is typically quite obvious.

Leaks in earthen dams can often be stopped by simply grouting the damage done by wildlife.  If the leaks are due to piping through the dam, grout injection is typically the solution.  If the leaks are confined to a certain depth due to porous soils, zone grouting at particular depths can be used to control costs.  Installers should use low viscosity resins when pumping into soils to ensure proper saturation and travel of the liquid resin prior to curing. 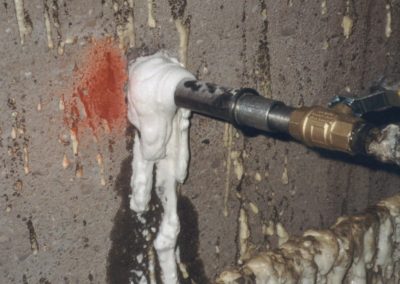 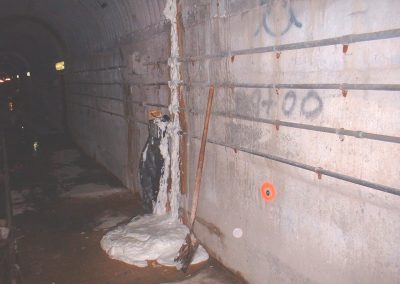 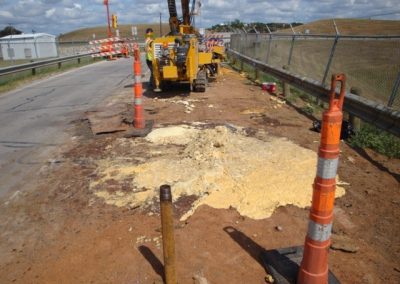 Stopping leakage through cracks in concrete dams is most often accomplished with the same basic crack injection procedures used for concrete walls and tanks.  Bore holes are drilled to intersect the crack, packers are placed in the holes, and grout is pumped under pressure into the crack.  In most cases, the injection holes are drilled deeper in dams than typical concrete structures due to the thickness of the concrete.

One important consideration in addressing leaks in dams is the pressure and volume of water flowing through the dam.  A large leak of thousands of gallons per minute must be addressed differently than a simple seepage leak.  While each dam repair may require modifications to the procedure, you typically need a grout with faster reactivity and a pump with higher output to address high volume leaks.  Your Mountain Grout representative is ready to advise you on the correct product and pump to achieve the best results.

Here are just a few examples of the wide variety of leaks and application methods that different Mountain Grout products have remedied.

The Upper Stillwater Dam in Duchesne, Utah was the largest RCC dam in the world when it was constructed in 1983 –1987.  The height of the dam face was 230 feet. The leaks ranged from 2 to 2,770 gallons per minute.  The leaks were sealed with Mountain Grout Ultra, a hydrophobic polyurethane grout with high elongation properties.  A complete report is available from your Mountain Grout representative.

Eagle Mountain Dam and Levee, in Fort Worth, Texas, had seepage issues in a zone as far as one hundred feet below the surface, losing thousands of gallons of water in an area where water is becoming more and more precious. 57,000 gallons of HL-100 were pumped into the zone during 2012-2013 in order to form a solid, impermeable mass where only porous fill dirt had been.  The job received ASDSO 2014 Project of the Year and a summary article is available here.

The reservoir dam at the Biltmore Estate in Ashville, North Carolina had developed small leaks through the masonry joints. These leaks were stopped with the injection of Mountain Grout Flexible in 2008.