Foundations may be built on poor soils, foundations may simply be poorly constructed themselves, or perhaps, as you’ll read below, piles need to be excavated and there are concerns about the soils around them failing.

Mountain Grout Polyurethane resins can be used to address all of these issues and more. One example came at the Louisville Convention Center. To prevent undermining and settlement of the column footings, engineers decided to use polyurethane grout to stabilize the soils. The type of soil the contractor encountered was brown, silty sand. The objective of the injection was to make the soil a compressive strength of at least 75 psi.

Six-foot iron pipes were driven and jetted five feet into the soils surrounding the column footings. Installers then pumped Mountain Grout Polyurethane Resin through the pipes at depths of 5, 4, 3, 2, and 1 feet.

Approximately 313 gallons of grout were pumped through 71 pipes. On completion of the grouting, the engineer expressed concern that the top foot of soil was not adequately grouted.

Contractors realized that the top layer of soil had lower moisture content than the lower layers. To correct this problem, the contractor saturated the surface with water before re-grouting the soil. An additional 45 gallons of Mountain Grout were pumped through 17 pipes. A month later, the owner’s engineer was on site to observe the pile cap excavation and to evaluate the suitability of the stabilized soils. He concluded that the soils had been stabilized sufficiently to achieve the stated objectives. Three laboratory in situ samples showed compressive strengths of 550, 620 and 600 psi. As the requirement was to have the soils be at least 75 psi., the grouting was judged to be suitable to prevent undermining and settlement of the column footings.

Call and ask for a Mountain Grout Technical Representative to discuss your foundation issue and get a material recommendation. 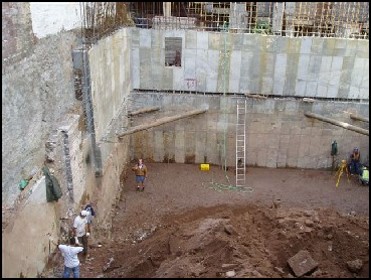 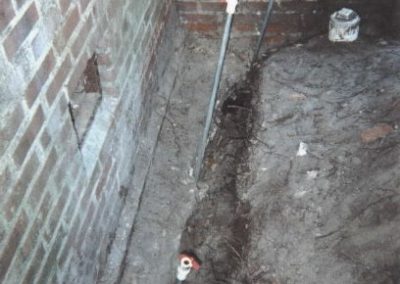 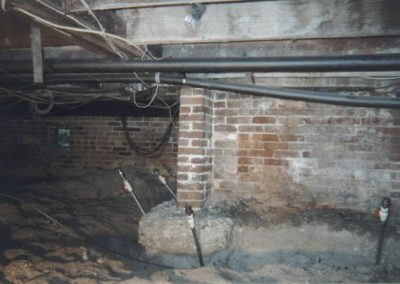