Tides constantly rise and fall, and when a seawall has cracks, joints, and other imperfections, the water carries soil away with it. The lack of soil can cause the seawall to fail and also create an unsafe void. The longer the problem is ignored, the worse it can get. Mountain Grout Soil Stabilizer is a thin (40 cps), hydrophobic resin that can be pumped under low pressure to solidify the soil, fill the voids and create a rock solid, impermeable mass. The curtain formed behind the failing seawall stops the outflow of soil and extends the life of the seawall itself.

Green Mountain International is familiar with seawall repair dating back to the early ‘90s. GMI worked with the Army Corps of Engineers and South Florida Water Management to develop procedures and a specification to address failed joints in a concrete seawall (C-51 canal) near West Palm Beach, Fl. The plan was to seal failed joints in the panels without excavating the soils to a depth of 10 feet.

The project was very successful by using grout pipes from grade and pumping the moisture cured polyurethane at each joint while retrieving the grout pipe (modified tremie method). Each project presents specific site conditions that prevent providing a comprehensive methodology that is all inclusive. At the C-51 project the contractor was able to work from grade which eliminated the need to dive the canal or work from the face of the panels drilling multiple holes in the section. Other seawall applications we’ve encountered over the years include stone block, Gabion baskets, wooden ties, fiberglass panels and soldier pile configurations.

The ultimate goal is to deliver the polyurethane grout into the failure zone or void. The expanding polyurethane grout will react with the moisture present, expand and seal leak paths, fill voids and stabilize surrounding soils. If drilling is required there are 3 basic sizes of packers, 3/8”, ½” and 5/8”. The installer would use an appropriate size hammer drill with bit size corresponding to the packer size to be used. If large voids are present, an injection needle could be employed as one would be pumping at low pressure. This plan would be repeated as work is accomplished along the length of the wall.

Grout pipe placement in soils may be accomplished using a Rhino Driver, a 40 pound hammer, water jetted or air jetted into place. Tube a manchetes have also been employed where zone grouting is desirable. Green Mountain’s technical team (staff) is always available to discuss specifics and if desired to meet with the engineers, owners’ representatives and management staff. We offer on site visits to discuss specifics and answer questions, cover health/safety and handling issues so that workers are well informed. 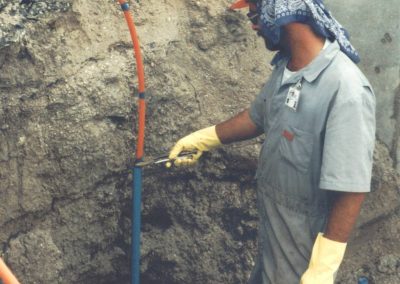 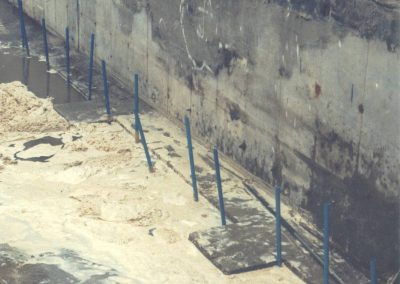 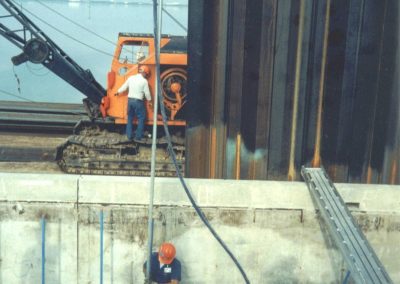